Addis Ababa University (AAU) Directorate of Industry Linkage and Technology Transfer under the Office of the Vice President for Research and Technology Transfer inaugurated a solar charging station for rural schools at Butajira Misrak Meskan Sereran Elementary School with the attendance of AAU higher officials and scholars including the vice presidents on the 9th of June 2022.

Mitike Molla (PhD), the Vice President for Research and Technology Transfer of AAU, on her inaugural speech congratulated all the stakeholders for the successful completion of the solar charging station project.

According to Dr. Mitike, AAU, as part of its community engagement, dedicates to make new innovative technologies accessible to the society. AAU will try to expand the solar charging project to thousands of rural schools of the country which are still suffering from lack of electric power, she added.

“AAU is going to take Misrak Meskan Sereran Elementary School project as a model for doing similar activities in the area. As the researcher is wishing to reach the project up to 1,000 schools, I think we can make it real and we will push on that,” she insisted.

As clearly stated by Dr. Mitike, it is obvious that the charging station is not only serving the school activities but also for all the students’ who are getting their fluorescents charged at the school and lighting for their studies at home which also benefits their families.

Shumey Berhie (PhD), Directorate for Industry Linkage and Technology Transfer, said that there is a technology incubation centre under the office in which a number of technologies are under incubation. 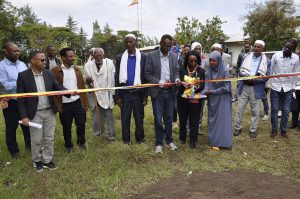 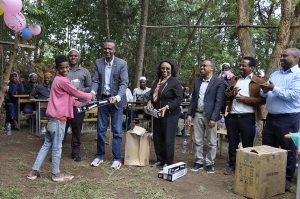 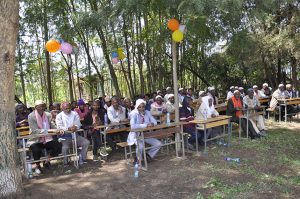 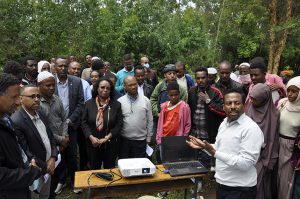 Dr. Shumey said that the Centre receives new technology project proposals from AAU students, teachers as well as researchers and Alumni members of the University every year. This year for the first time, the Centre opened an opportunity for women innovators only and that will be an annual trend for the future, he added.

“We have a number of new technology projects including the solar charging station, the one in Butajira. We are making multipurpose moveable shops in collaboration with Addis Ababa City Administration to solve roadside and pavement open market problems,” Dr. Shumey said.

These shops can be carried by a bicycle or pushed by hand in order to move or relocate them to any location needed and thousands are in order from the beginning, he added.

As Dr. Shumey stated, there is also a coffee disease medicine very closely ready to the business market made from coffee bark and the soil around the roots innovated by AAU researchers. “Another from cassava and inset for industry raw materials is ready and only waiting for the market,” he further stated.

There is also an automatic machine, according to Dr. Shumey, which eases spinning works for weaving for which everything including business plan is already finished. He added that a number of new innovative projects including software are on the way at different levels of performance.

“As the area is extremely wide and needs a huge market endeavour, the cooperation of different entities including organizations, associations, the private sector, officials and individuals are highly recommended and welcomed as well. Especially, the private sector should join this knowledge based sector, the route by which developed countries reached their peaks of development,” Dr. Shumey elaborated. 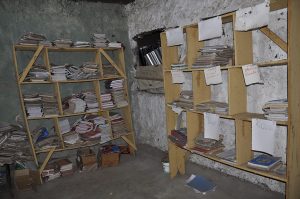 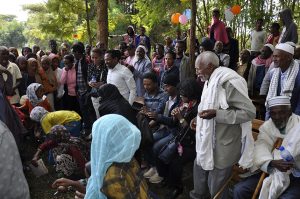 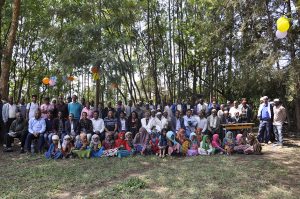 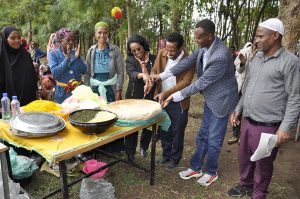 According to Dr. Shumey, though the opportunity of the AAU innovative activity is currently limited to its staff, students and the alumni, it will widen the activity in all enabling directions while its overall capacity in terms of enabling environment and finance is developed.

“Now, we are working with the existing capacity and the comparative advantage of the University we have,” Dr. Shumey finally said.

Engineer Getachew Teshome, founder of Silicon Technologies-Ethiopia, the initiator, project engineer and facilitator of the whole Solar Charging Station project at Misrak Meskan Sereran Elementary School, firmly said that he will be very happy after his seeing at least 1,000 rural schools of the same problem is resolved.

In response to the request raised to AAU by the community, the Misrak Meskan Sereran Elementary School administration, teachers and students regarding the overall facilitation including library, classroom facilities and the like, Mathewos Ensermu (PhD), stated that AAU will do whatever it can to make the school a model one. The AAU-Sida Project covers the majority of the charging station’s costs.